Poppies are loaded with contrasting meanings, differing from culture to culture. The red flowers are a powerful medicinal plant (an astringent, a sedative and, of course, a narcotic), and a staple in Eastern European baking as well as a symbol associated with Communism.

In Greek mythology, Demeter created the poppy so she could sleep after the loss of her daughter, Persephone. The twin brothers Hypnos (the daemon of sleep) and Thanatos (the daemon of death) were depicted with a crown of poppies.

Because of its association with poppies flowering in the spring of 1915 on the battlefields of Belgium, France, and Gallipoli, the red poppy was adopted as a symbol for memorializing the military dead.

While associations range from remembrance—Armistice Day— to revolt, here I attempt to question the ways in which Capital (Global Capitalism and the runoff of international Neoliberal regimes) has numbed the agenda of the Left. 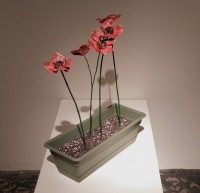