At Camp CARPA, Jon Winet (Cpl) and Katie Grace McGowan (PvT) debuted the alpha version of the "Virtual Drill Sergeant"—a mobile web application designed to introduce a new paradigm for programming the soldier athlete. Unlike the 20th century model of boot camp, the app attempts to challenge each recruit to a personalized program that pushes their physical and emotional comfort zones. Rather than the physical and psychic trauma associated with boot camp, our goal was to design an app that would play with the absurd notion of a humanizing form of military training. A soldier’s training regimen was turned upside down as a demonstration of a demilitarized-military training.

The VDS was affixed to Pvt. McGowan who demonstrated the app by performing the prompts designed by Winet. PvT McGowan was instructed to read novels and share her reflections, go on walks, eat candy, enjoy tea with a new friend, etc.; rather than be subjected to rote discipline in the name of patriotism. The research conducted via this durational performance led us to better understand the constraints of the project and will inform forthcoming versions of the application.

The Craft Advanced Research Projects Agency (CARPA) is a central state agency of the United States Department of Defense responsible for the development of new craft technologies for use by the artisans of United States and our allies. The focus of CARPA is the strategic advancement of craft in order to shape and sustain conditions for stability and progress. It maintains technological superiority for the benefit of the people of the United States. 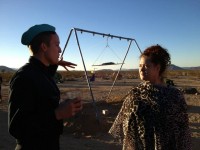